There are many types of rooms in UnderMine. These rooms include:

These rooms make up most of the floors and may contain enemies, treasures, Items, and environmental dangers.

These rooms must be blown into with any sort of an explosion. If there are sparkles on a wall, it has a secret room behind it. Sparkles can be revealed with any kind of an explosion in the room. They may contain one or more Blessings, treasures, puzzles, items, and so.

Secret rooms can be bombed out of into locked rooms, and saving keys.

Crawl Spaces are hidden underneath rocks which must be exploded to gain access. The Potion of True Sight can be consumed to see any hidden Crawl Spaces. These Crawl Spaces may contain Mr. Rat and Mrs. Rat, Kurtz, Lillyth, treasures, puzzles, items, Blessings, and Potions.

These rooms contain a Relic. It is always locked with the exception of the first floor's room (The Goldmines 1 in the main game).

Shops can contain items, relics, artifacts, and more. There are some different types of shops. The shops may be found locked.

Contains a lever which costs health to pull. Rewards from pulling the lever include such as Pilfers (the normal green ones), Blessings, money, skulls, potions, food, bombs, and keys.

Offering Rooms contain at least 2 different Relics in exchange for Curses. The floor may be completely covered by [[oil] or locked.

There is no point in doing so, but destroying the Relics does not curse the player.

Treasure rooms contain Chests, Basic Items, Potions and such. These are usually rooms that are connected to 1 room. The

Adventurer's Whip increases the chance of finding these rooms.

Hoodie can be found on the first floor of every Location behind blue blocks to the north of the starting room. The blocks require the Echo Blast upgrade to bomb. The room will contain an opened crawl space that contains Hoodie. The player can teleport to the first floor of any Location that is below the current one if the player owns the corresponding map Artifacts.

These rooms signify rooms with a quest or NPCs.

Most of these require Bombs to get into.

The room contains the Location's Boss. The entrance to the room is a large pit in the ground. The fight beings if the boss has not been defeated on this Ascension level; otherwise, the room will be empty. The boss room's exit leads to the entrance to the next Location, and can be used as a shortcut.

These rooms contain shrines. The player may pray at a shrine for a blessing at the cost of a curse, or pray to get rid of a curse at the cost of health. For more info, see Altar, Blessings, and Curses. The room may be found locked. 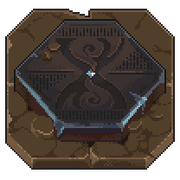 This room does not have a proper name yet. It can spawn on any floor. The room contains an altar that acts as a bank for a relic. The relic placed on this new altar is stored for future runs.